What is National Wonders?

National Wonders is our series of short videos highlighting the brilliantly wacky side of our beloved country. Sure, we all know about Westminster Abbey and Stonehenge, but what about Olney's pancake race and bottle kicking in Hallaton?

Join our tour guide, Ben, as he takes you to some of England's most unique events and meets the amazing people behind them.

So get involved and see more below as we ask, ‘Is this really how the UK spends a day?’ 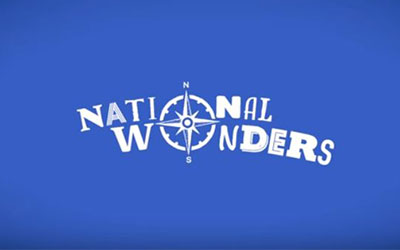 Watch the National Wonders playlist below

Enter the longest maze in the world with Ben as he drops some facts and a few nuts to find his way.

Dive into the Midlands to find a pub where marbles roll uphill and Ben's legs don't work quite as they should.

Is it a cafe or a museum? Ben's not quite sure. All we know is you can get coffee and the back-end of a zebra.

Ben thinks he nose noses... (Sorry!) But can he find all seven scattered across London?

Explore Prince's Park with Ben as he undertakes the world's shortest fun-run and manages to lose his dog.

Travel to Keswick, the birthplace of the pencil, to discover the worlds' largest colouring pencil and more!

Events to take part in

In the most daring National Wonder yet, Ben gets up close with flaming barrels of tar and a very large bonfire.

Ever wanted to see a presenter get hit by a black pudding? Ben's visit to Ramsbottom didn't go quite to plan!

Dare you enter this horrifying scare maze with Ben? He's pretty confident he'll be fine, but how long will that last?

Dive into the World Bog Snorkelling Championships with Ben in this wet and wild edition of National Wonders.

Ben tries his hand at egg tossing, egg roulette and more than a few egg-cellent puns in Swaton, Lincolnshire.

Venture to the Cornish town of Padstow to get a glimpse of some 'osses' and investigate a pregnant maiden.

Join Ben in Hallaton, Leicestershire as he takes on three beer kegs, two rival villages and one very large pie.

See Ben try his first battle cry, admire beards and even get up close and personal with some weaponry.

Watch Ben head to Olney, where he finds wigs, firemen, a transatlantic rivalry... and the odd pancake or two.

Get the latest updates on National Wonders, as well as plenty of travel inspiration, scenic views, cityscapes and more...

Join in the conversation on Twitter and let us know if your town should be featured on National Wonders!

Prefer using Facebook? You can keep up to date with everything National Wonders and much more on our page.

Our Insta page is jammed full of great views, beautiful destinations and even a National Wonders trailer or two.

Visit our Instagram page
Please be aware that the information on this page will have been accurate prior to the coronavirus (Covid-19) pandemic. However, with the rapidly-changing nature of many sectors within the UK, we cannot guarantee all of this information will still be accurate at the time of reading.

Call or get in touch online
We are here to help

Track your coach in real time

Part of the National Express Group

Our passenger descriptions are designed to help you choose the right ticket for yourself or your fellow travellers.

Adult fares are applicable to all passengers aged between of 26 and 59 inclusive.

Children aged 12 or under travelling on any European service must be accompanied by an adult aged 18 or over.

Unaccompanied children will not be carried

Children under the age of 16 are not permitted to travel on any European service unless accompanied by an adult aged 18 or over.

Young persons aged 16 or 17 years can travel alone on European services but only if they have a letter of authority from a parent or guardian.

Our passenger descriptions are designed to help you choose the right ticket for yourself or your fellow travellers.

Adult fares are applicable to all passengers aged 2+. Adults under the age of 16 are not permitted to travel alone on any European service unless accompanied by an adult aged 18 or over or they have a letter of authority from a parent or guardian.

Children aged under the age of 2, must be accompanied by an adult aged 18 or over. Unaccompanied children will not be carried.